A Decade of REGL

At PTI we have focused on the Dividend Aristocrats and the Dividend Champions as the two universes of stocks from which we look for individual investments, because we believe that these stocks demonstrate the strength and quality we are looking for when investing.  We have created real world portfolios from the Aristocrats, and theoretical portfolios based on the Champions.  We have also followed and reported on the returns achieved by the Proshares S&P 500 Aristocrats ETF “NOBL”, which is made up of all the Aristocrats.  Over the life on this ETF it has matched the S&P 500.

There are 47 stocks in REGL, so they were divided into groups of 16, 16 and 15 stocks for this study.  This first chart shows the results of the 16 stocks with the highest PAAY, with a comparison to SPY over the same time period. 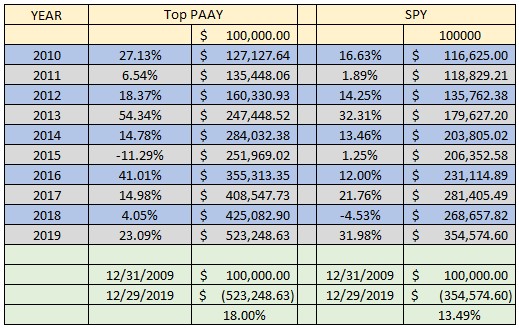 The following chart shows the middle group of PAAY stocks. 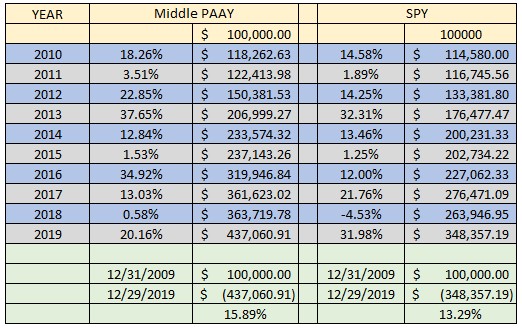 This third chart shows the returns for the group of stocks with the lowest PAAY. 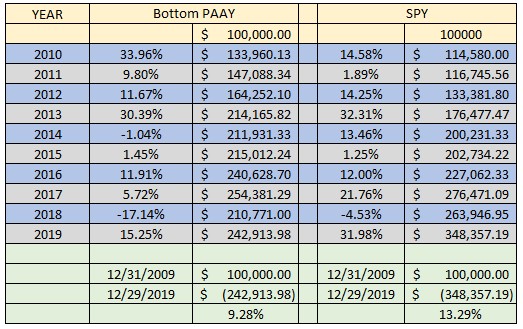 This group produced an annual return of only 9.28% and had a final value of $242,913.  The confirms what we would expect, that the over-valued stocks, the ones with the lowest PAAY, performed the worst over time.

This last chart shows the returns for all 47 stocks combined.

These returns demonstrate two things.  First, over the ten-year period a portfolio of mid-cap dividend growth stocks would have beaten the market.  Second, investing in the most under-valued stocks at the beginning of each year, the stocks with the highest PAAY, produced vastly superior results than any of the other group of stocks, including the market as a whole.

We do have to mention one serious problem with the study.  It is called survivorship bias.  Basically, it means that the stocks which are in REGL right now are not necessarily the ones that would have been in REGL back in 2010.  By using the present-day holdings for our study, we are automatically using the “survivors” of the past 10 years.  Other stocks which may have been in REGL in the past may have cut their dividend and would been removed from REGL.  And these stocks may have hurt the results we would have achieved.  If we knew all the stocks that would have been in REGL over the years we could have included them in the study for more accuracy.  Unfortunately, we don’t have this information.  So, although we believe the above results do give important information, we must understand that they may be affected by the survivorship bias.

Going forward we at PTI will continue to follow REGL, and may integrate this ETF, or the universe of stocks it represents, into some of our portfolios. 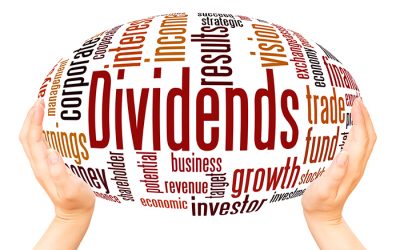 A Decade of Aristocrats

As the decade closes, we at PTI thought it would be a good idea to review the decade in terms of the Dividend...

What are the The Dividend Aristocrats?

The Dividend Aristocrats are a group of stocks, all of which are members of the S&P 500, and all of which have... 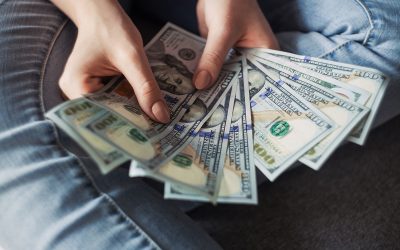 As a dividend growth investor, there are certain dates one must be aware of, and understand, to help you understand...